A Gift from God

On July 17th I had my regular acupuncture appointment. She had me lay down as she proceeded to check my pulses. In acupuncture, the quality of your pulse can offer a great deal of information. I noticed she took longer than normal and her eyes were closed. She then looked up at me slowly and ask “are you pregnant?”. My first response was “no, not that I’m aware of”. She asked if I could be and I responded with “yes, it’s possible”. We were just on our one year anniversary trip two weeks prior to the appointment. According to her, we had a great time…..I will just leave it at that. She asked me to get a pregnancy test and report back to her with my results. After doing some research on how acupuncturist can detect pregnancy by your pulse, I learned in Chinese medicine, when you have a fast pulse, it indicates some type of heat in your body.  If you know anything about being pregnant, you know it needs to be warm in there to bake that baby! After my appointment I was instructed to keep my mid section warm and was told my body wants to be kept warm. I went home and said nothing to Brandon about my appointment because I didn’t have much to give him at that point (no solid concrete information), but I made the mistake of telling him the acupuncturist said to keep my mid section warm. Lord have mercy…..I couldn’t keep him off of me! Every time I looked up he was rubbing my belly! Lol

I did as I was told and purchased a test and took it right when I got home….but it gave me a negative reading. I took the second one in the morning and it was still negative. I figured maybe it was too early to detect or she might have felt something else in my pulses, as I read those same fast pulses can also indicate other things.

As the weeks went on I noticed a few things to include weird headaches and cramps which I normally get both during my cycle that I had just gotten off of by the way. I couldn’t close most of my pants and whenever I wore things that were fitted, my belly poked out. I just figured I was having the worst bloat of my life. I continued with my acupuncture appointments and she kept feeling that same fast movement in my pulses and asking if anything had been revealed and my response was always “nothing yet” though I did inform her of all the changes I was noticing.

Fast forward to about a month later (August 14th). Sleeping on my stomach by this time was super uncomfortable, my appetite was changing, energy was getting low, and I just wanted to sleep, etc.  I kept saying to myself….you’re having way to many changes for something not to be going on in there. A women knows her body! While Brandon was in the room watching TV I randomly decided to take yet another test. Kali snuck in the bathroom with me this time. I took the test and within seconds the plus sign popped up! I looked at Kali and said I’m pregnant and immediately busted out crying. The TV was on so Brandon couldn’t hear me. You guys know I prefer to be creative and so I had a special way I wanted to share the news with him.  I now had to pull myself together and act like nothing happened  to get out of the bathroom. Thank God he wasn’t there by the time I came out.

You’re Going to be A Daddy – How I shared the news….

I sent a message to James and told him I needed his photography skills to help me execute my vision to tell Brandon. Of course he was thrilled and accepted without hesitation. I told him to act as if he was giving us an assignment, and use us as guinea pigs for a different type of shoot he wanted to try…but I came up with everything of course. The assignment was to get a chalk board for each of us and we were to write 3 words that described the other person and we couldn’t show each other until we were given further instructions at the shoot.  So I told Brandon, James had an assignment for us and explained it to him. James suggested we meet him in Pasadena Maryland on the waterfront and we agreed.  Once down to the water front he positioned us so we couldn’t see each others boards throughout the entire shoot. The public almost ruined the surprise as they saw what was written on my sign as they were passing by and started pointing and smiling or standing around to watch. For the last shot, James told us to stand back to back while holding our sings up and then turn around and face each other on the count of three. Take a look at how the shoot went below! We are both looking forward to this new venture. Can’t wait to see what God has in store for this chapter of our lives…Enjoy! 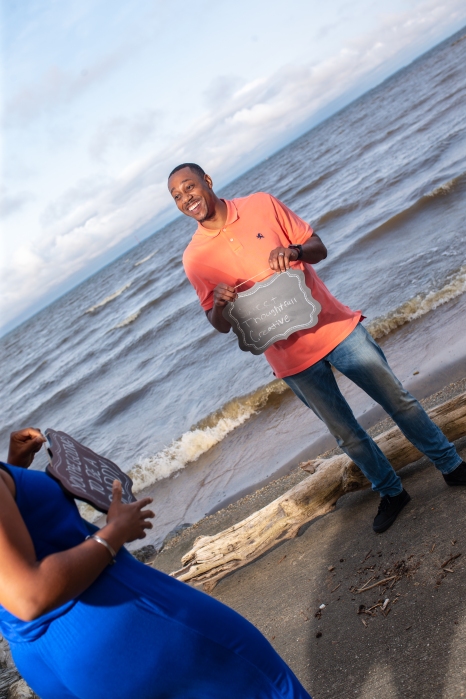 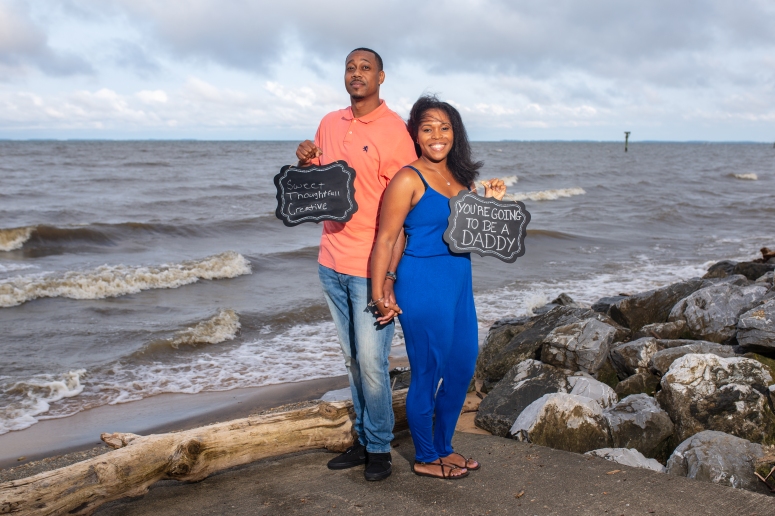 14 thoughts on “Onto the Next Chapter”